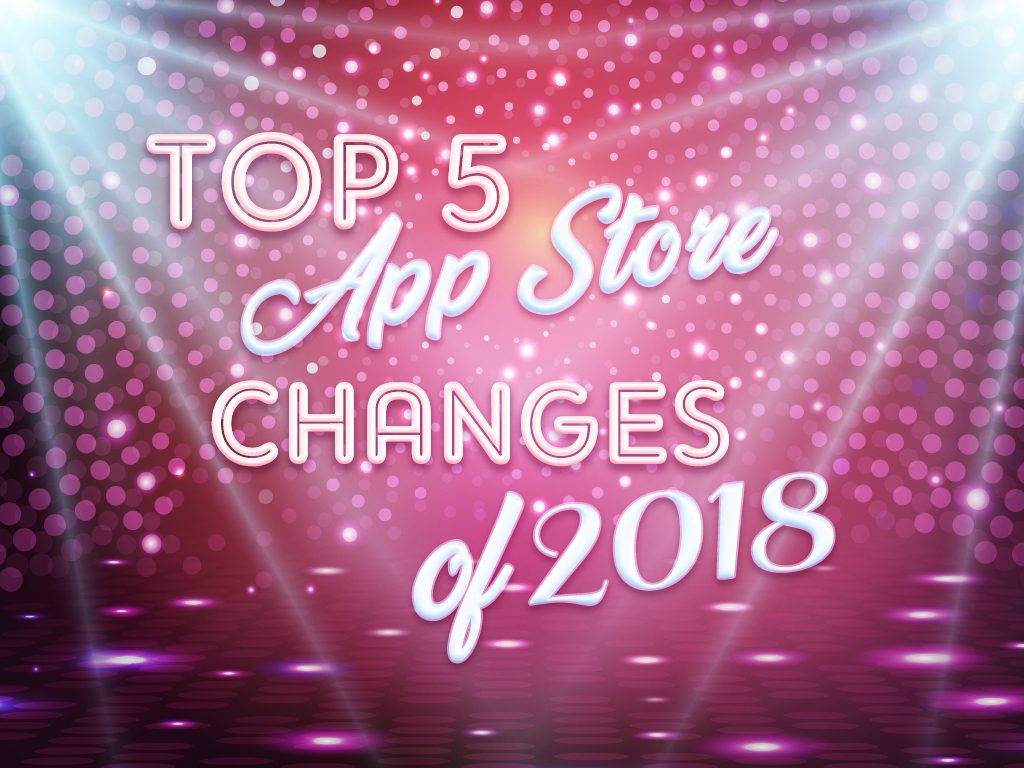 Lots of changes this past year to the App Stores! They weren’t as glamourous or groundbreaking as a new iOS version to make flashy headlines, but they brought huge advances to the ASO world. Let’s look back at the top 5 ASO-influencing App Store changes and how we at yellowHEAD have learned to squeeze them for all they’re worth!

What happened: The iOS App Store upgraded each app’s store listing screenshots gallery from 5 images to 10, in addition to the 3 preview videos.

The Effect on ASO: This increase may seem excessive since only a small percentage of app page visitors are ‘Explorers’, of which only a fraction will actually reach the last image. But hang on.

Consider another huge change in iOS – the Creative Sets feature in Apple Search Ads. Now I hear you saying ‘what’s the connection – paid, organic, ads, app listing… you’re not making sense’ – but it’s all so beautifully connected and interdependent, really!

Let’s review: Apple Search Ads Creative Sets allows the app developer to select which screenshots to display in ads that appear in search results for targeted keywords. Since each ad shows 3 images (in portrait orientation), the app advertiser can bid on a keyword with different ad creatives, so long as those images are included in the screenshot gallery of the app page. For example, run simultaneously two campaigns targeting the keyword “2018” – one with screenshots #1, #2, #3; one with screenshots #3, #4, #5. 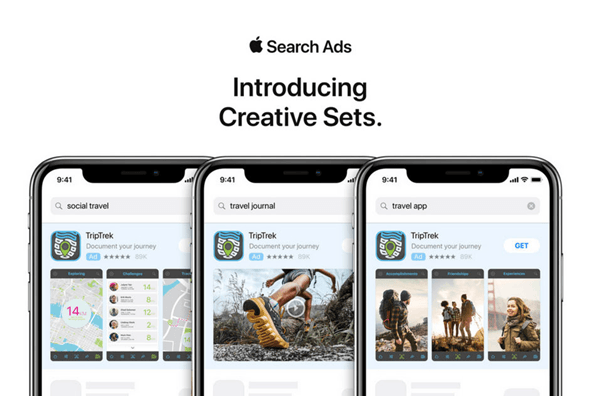 The higher the TTR a Creative Set has, the more valuable that particular selection of screenshot images.

Now, with 10 screenshots, there are more possible combinations for testing. And, because the full 10 screenshots will probably not be seen by typical explorers, the last few can be completely different in look and feel.

So while 5-versus-10 screenshots probably won’t make or break your conversion rate, in combination with ASA Creative Sets it’s allowed app developers to perform measurable A/B testing for the first time ever from within the App Store.

Our 2019 Wishlist: Would a simple GPDC-style Experiments tool be too much to ask for? If so, then how about adding icon or title targeting capabilities for ASA?

What happened: With TestFlight, app developers are now able to give access for beta testing with a public link. Previously, beta testing was restricted to specified email addresses (friends, family, the dev team,…). 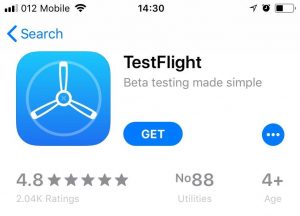 The Effect on ASO:Both Google and Apple have made a switch in their algorithms to focus on QUALITY apps over the past year or so. As a result, the likelihood of ranking well for competitive keywords, for example, is relative to the quality of the product itself.

Moreover, reviews and ratings have become more important not only for the algorithms, but also for conversions. An app’s rating is prominently displayed on impressions; page visitors can easily read, sort, skim the reviews. As such, so much depends on your app being, well, good.

Enter TestFlight. What better way to avoid the pitfalls of a lousy product with negative customer reviews than to beta test it with real users! Public sharing on social media, newsletters, etc will bring a more heterogeneous test base AND promote interest in the app. Get extensive feedback before launching in the app store and keep your rep clean.

Our 2019 Wishlist: For our dear app developers: may your betas turn into alphas.

What happened: Google Play changed the layout of the Store Listing. The Feature Graphic banner image was moved from the top of the screen to the middle, as the first image in the screenshots gallery, and visible only if there’s a video.

[Before and After the Google Play Redesign (credit: SplitMetrics – https://splitmetrics.com/blog/google-play-store-redesign/)]

The Effect on ASO: Conversions. Not necessarily a change for better or worse, but does command rethinking your graphics strategy. For example, if you previously had your USPs and CTAs in the first screenshot, the Feature Graphic (with video) will push that image out so it won’t be seen on first glance.

The yellowHEAD ASO team did substantial AB testing on video/no video in this new format and found, on average, that having a video still converts better (assuming the video is well done), even if the screenshots require user scrolling. 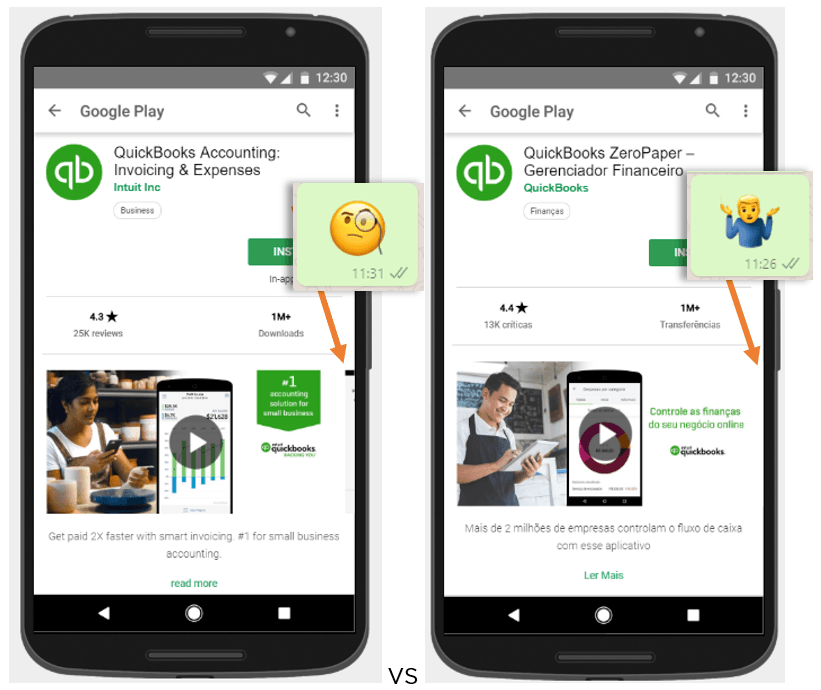 [“Ah, a sliver of a screenshot. Show me more!” versus “Where’s the sliver? I guess there’s nothing else to see here.”]

Regarding Short Description, we have been performing extensive short description AB tests before and after the change. We concluded that since we still see significant results between variants, overall, the short description has retained its importance in decision-making, despite it being below the screenshots.

Ratings & reviews as well as popularity (number of downloads) are, of course, still very important for conversions – especially now with the new layout. Again, this is all part and parcel of the focus on quality, so make sure you’ve got a great product.

In summary, if you have limited time and resources, focus on creating a powerful, succinct video and feature graphic. This asset is front and center and has been shown to have the most impact on CVR. If you decide not to use video, then those first screenshots should be easily scannable and intuitive now that they are viewed in their entirety on first glance.

Our 2019 Wishlist: A slightly wider sliver of the first screenshot when there’s a video (it’s really not much). Also, it would be interesting to see the impact video auto-play would have on conversions.

The Effect on ASO: We’re all familiar with the importance of localization in ASO. iOS keyword localization for search optimization has been restricted until now to 25 languages, which has consistently produced a nice uplift in worldwide installs. In-depth local keyword research and targeting will increase visibility in these key markets. Localizing screenshots and descriptions will help in conversions. The effect of localized ASO on worldwide installs will likely be felt even more.

What else? With ASA launched in more countries, we now have localized keyword popularity scores ‘from the source’ to use in our keyword research. We recommend cross-checking these traffic scores against other sources, but overall it’s a move in a more open, informative direction from Apple (which we like).

Our 2019 Wishlist: We’re in Israel, so we’d love to see Hebrew and Arabic.

What happened: Following a period of beta testing, Google Play Developer Console officially rolled-out a breakthrough in User Acquisition Reporting. Namely, the division of Play Organic into Search and Explore, with a further breakdown of the specific keywords used in Search. 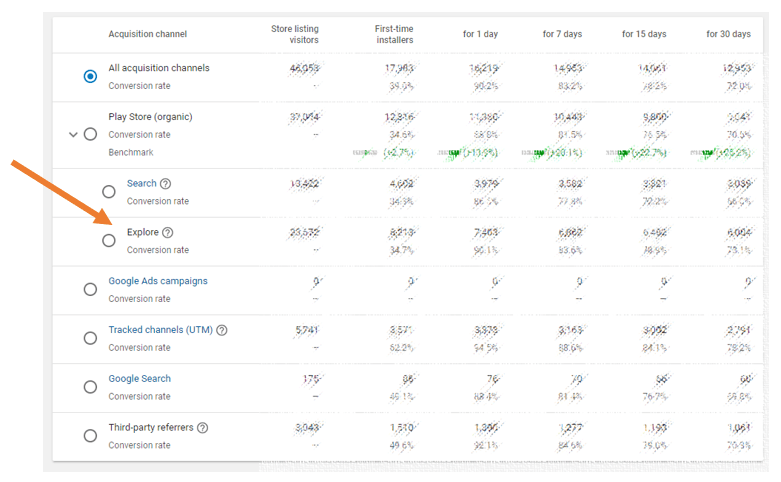 The Effect on ASO: Definitely the #1 advancement in ASO in 2018! ASO professionals have been murmuring for years the old mantra “the app store is a black box” – there is so much we can’t know because data is simply not available. Well now we have a peek into the proverbial box – and it’s great.

It’s the first time any app store has made this information available. Traffic scores for keyword popularity have always been estimated store-wide, yet here we see keyword popularity for the specific app (which is what we care about).

We use this data to work backwards – we analyze the list of words, check which words bring the most traffic, check their conversion rates, and focus on improving ranking positions for those keywords and their longtail cousins.

We also check the overall breakdown of Search-Explore to understand how much traffic is coming directly from Search relative to other sources. Since search optimization is a major pillar of ASO, this analysis helps us quantify potential and performance over time for this aspect.

Limitations: Of course, the new info has its limitations. The keyword is provided only if it brings in at least 100 Store Listing Visitors (this is why you can get a longer list if you view by Month). Everything else is grouped under “Other”.

Furthermore, the list is not filterable by country. You can often deduce the country by the language of the keyword, but when it’s an English word, go figure which combination of countries the traffic may come from.

Predictions: With many ASO tracking tools encouraging integrations with Developer accounts, we expect that this data will become one of the data points that ASO tools use to estimate traffic scores.

Our 2019 Wishlist: Keep the data coming! Here’s to making the box a little less black.

Thanks for reading through our 2018 ASO wrap-up! The above list is just a taste of what was, selected by our ASO team based on the effect each change has had on our work. There were many that didn’t make the list – contact us if you think others should’ve been included.