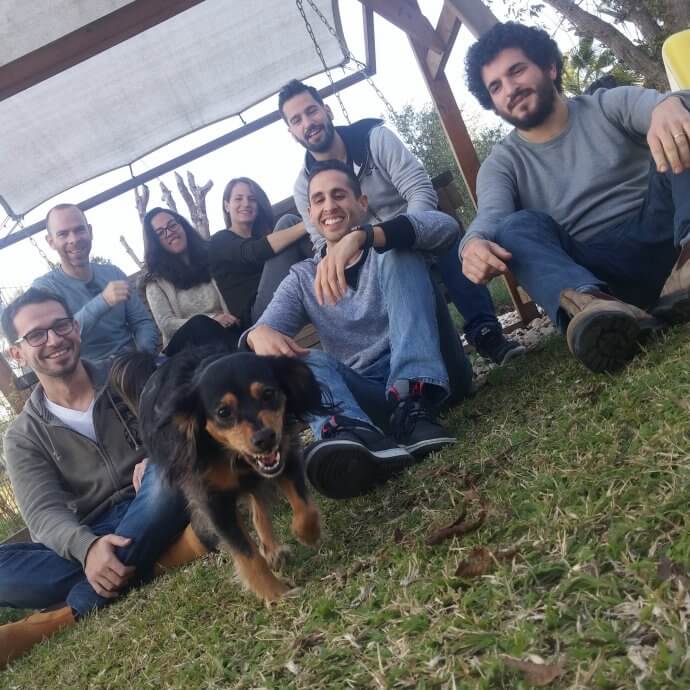 What is an app page? At this point, it is important that you recognize that there are key differences in the features of an app page between app stores. For ASO purposes, these features fall under two categories: search optimization and conversion optimization. Take a look:

The table in this picture serves as overview of everything that we can change on an app page. Thus, these are the tools for ASO.

WHAT IS APP SEARCH OPTIMIZATION?

Search optimization or search visibility, refers to all of the areas you can work on to improve how an app ranks for a keyword that is used in queries.

For example, you can improve your app title or description. The keyword list in the iOS store is another field that deals with search optimization.

WHAT IS APP CONVERSION OPTIMIZATION?

Conversion optimization refers to the areas of the page that may not necessarily help in search, but help in converting visitors to users. This includes everything that is concerned with visible texts (not the iOS keyword list) and graphics.

For example, an icon may catch a visitor’s eye in the initial search and aesthetically pleasing screenshots may entice him or her to install the app.

Some of these features, like titles for instance, overlap and we’ll discuss this a little later when we explain the best practices for each of the fields.

What does all of this really look like? Let’s take a look at a live version of the things we’ve been talking about. What you can see here is what we like to call the “ASO canvas”. 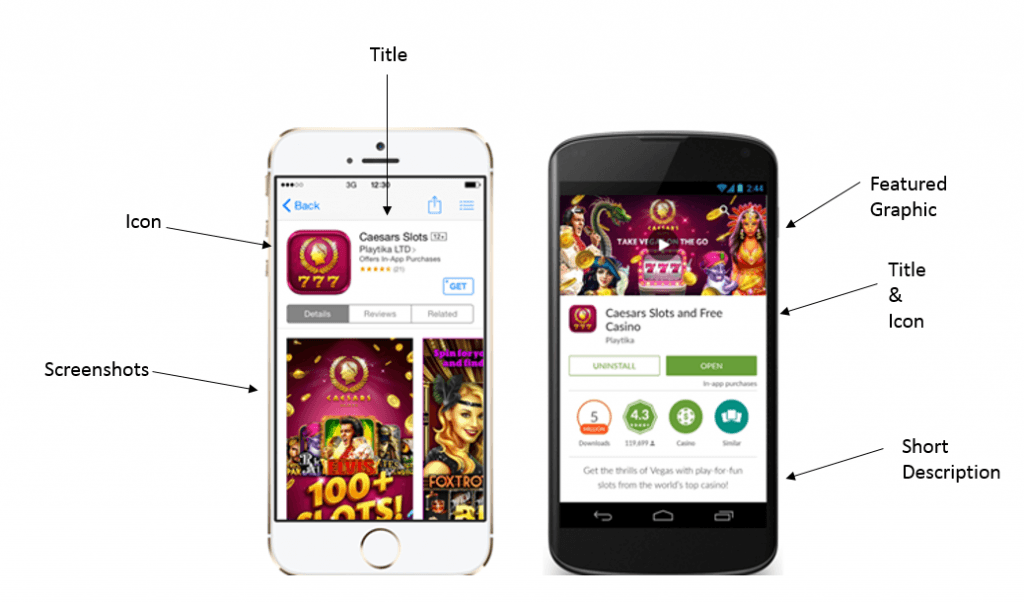 GOD IS IN THE DETAILS

The iOS and Google Play app stores are different in appearance and, as such, optimizing them is a different process.

If you take a look at the “above the fold” area, or the first screen’s view on your mobile phone, in both stores we see the app title, the publisher name, and the reviews. But the rest of the information is different.

On the left in iOS, the first two screenshots from the app are by far what take up the majority of screen space. The icon is large as well. In Google Play on the other hand, the feature graphic at the top is what is noticeable at first glance.

At the bottom of the screen is additional information like the app’s category and number of downloads along with a short description. As we scroll down, in iOS there is a description and a “What’s New” section if the app has it.

In Google Play, we get “What’s New” and screenshots. In both stores, users have to actively tap on “read more” in order to see the full description.

ARE YOU AN EXPLORER OR A DECISION MAKER?

An interesting fact about how users make decisions here: about 50% of users are “instant decision makers” and the other 50% are “explorers”.

Instant decision makers come to an app page, see what it looks like and, within a matter of seconds, make a decision of whether or not to download.

Explorers on the other hand, take time to open the screenshots and scroll through them to get a better understanding of the app’s functions. Interestingly, only about 1% of users will actually hit “read more” on a description in Google Play.

So what does this all mean for you?

It means you need to make sure your app pages are highly aesthetic and appealing. You need to use what little space you have to tell a story about the experience of your app for those users who are going to take the time to look, read and learn.

HOW DOES AN APP STORE FUNCTION?

One of the biggest areas of focus in ASO is comprehending the searches that occur in app stores and how app stores’ algorithms treat those searches. Generally speaking, users type in queries to find apps.

When a user types in a query that is related to your app, your app should appear in the search results.

It is vital that your app is ranked as highly as possible within the results to gain visibility and installs.

Since there is so much emphasis on ranking well for searches that are made in app stores, we need to have a firm understanding of how search engines work.

We know that Google Play and the iOS Store use algorithms to rank results. These different algorithms have the same goal, which is to give the user the best experience possible and keep them happy.

SEARCHES ARE ESSENTIALLY A FORM OF COMPETITION

So how exactly do app search engines determine a best experience for a user? How do they try to keep users happy?

Each search query entered activates a sort of competitive process, where each app receives a score that illustrates its experience for the specific query made. Essentially, all the apps in the app store compete every time a search is typed in!

Apps compete for a given keyword in the following way: App stores calculate the experience for a given query based on the interaction between relevance and strength.

Relevance has to do with how suitable an app is for a given query. There is a relevance score that is calculated for each keyword that is used in a query based on the app that addresses that keyword. 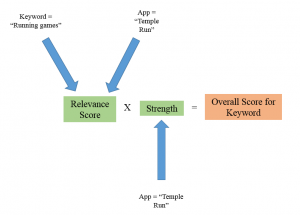 For example, the common query of “running games” is very much related to the popular game “Temple Run,” since the goal for players is to keep the avatar running and rack up points.

Relevance is a key place where ASO services focus their efforts; picking titles and keywords that are related to the experience an application will provide makes an app more likely to succeed.

App store search engines do their best to figure out what your app is about. In order to do that they use algorithms and scan every bit of information that they can, to determine what is important about your app.

Strength is a measure of if your app is generally considered a good app. This is calculated with the help of several factors:

There are additional factors that affect whether or not an app will be strong and create the best experience possible for a user.

Outside of the US, this includes whether or not an app is localized. We will elaborate on this subject later on, in a chapter dedicated to this.  In Google Play, the number of backlinks to your app also influences its perceived strength.

What this means is, if your app is referenced on blogs, tech websites or social media outlets, the Play Store believes your app is generally a good fit for users. Similarly, the number of Google pluses an app earns influences its strength. These are similar to “likes” on Facebook, and are another method for satisfied users to provide positive feedback.

To illustrate how relevance and strength interact, take a look at this example: 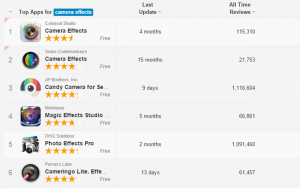 Above are the results for the search query “camera effects” in the US iOS store. This data was pulled using Sensor Tower’s keyword research tool.

Notice how the first two apps have an exact match of the query in their titles. Because of this, they are very relevant for this search query, which means they have a high relevance score.

However, compared to the app in the third ranking, the first two have fewer reviews and lower ratings; this means that the third app likely has greater “strength” than the other two.

The iOS store considers the third app as less relevant for this search query, since it does not contain an exact match in the title. In this case, in the battle between the strength and relevance, relevance wins.